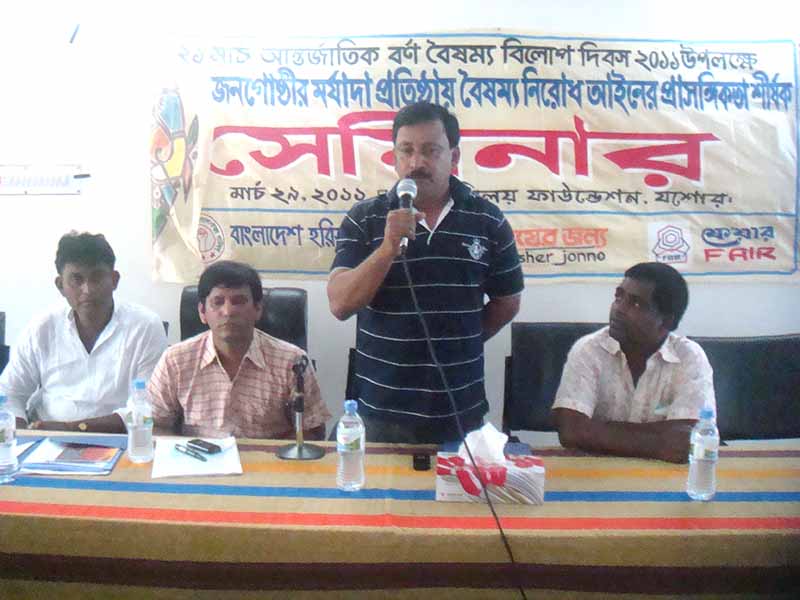 Anti-discrimination act is needed to establish the constitutional rights of the marginalized people. In order to create public opinion and create pressure on the policy level of the government, in association with FAIR and Manusher Jonno Foundation, Bangladesh Harijon Oikko Parishad arranged a national seminar on Relevance of Anti-discrimination Law to Establish Dignity of Marginalized People on 21 March, 2011 to observe International Elimination of Racial Discrimination Day.

In the same form a seminar was held on the same topic in Conference Hall of Shishu Niloy, Jessore on 29 March, 2011. The seminar was launched with the welcome speech of Dewan Akhtaruzzaman, Director of FAIR.  Dewan Akhtaruzzaman in his speech described in details how the marginalized people are being discriminated. He also presented the perspective and objective of the seminar. Renowned educationist and retired teacher Tarapado Das wrote the main essay of the seminar. The essay was presented in the seminar by Bisnupada Hela, Secretary of BHOP, Jessore. The essay delt with the problems of the marginalized people, the discrimination and stigma practiced against them and the responsibilities of the civil society or the mainstream people and the government to solve their problems.

Sex worker Ranu Begum, president, Shakti Unnoyon Shangha delivered speech on behalf of sex workers and she described the discrimination and hatred practiced against them. She said the sex workers live in the hatred of the society. Though their families receive the money earned by them, they don’t have access to their families. She said, our children are not admitted in all schools. Nobody rent house to us. We don’t get medical services. Nobody takes part in funeral after our death. She requested the mayor of Jessore Municipality and others to come forward to establish the rights of sex workers and for their development.

Shajahan Ali, president, Bangladesh Protibandhi Parishad, Churamonkati, delivered speech on behalf of the disables. He said, disables are deprived everywhere. They don’t have good opportunity. Neither the state nor the society thinks of them. We are victims of discrimination even in our family. We cannot lead our lives like others, even if we intend that.

Representative of Harijon Community Bisnupada Hela sain in his speech, the Harijons of Bangladesh are deprived everywhere. After their arrival in Bangladesh in the reign of the Britis, Harijons have been serving the city dwellers. But they got nothing in return. Though they serve in municipalities’ generation after generation, their job is temporary and master roll basis. After the end of their service, they leave the municipality empty handed. He requested the newly elected mayor of Jessore Municipality to bring the jobs of cleaning service under permanency. Anti-discrimination Act is needed.

Shyamlal, BHOP said, the literacy rate among the Harijons is very low. Though the main reason behind this is poverty, the mainstream people and employers are also responsible. Some employment authority doesn’t employ educated Harijons as per their education level. Instead they persuade the Harijons to receive jobs of cleaning service. In educational institutions, sometimes the class-mates avoid Harijon students. They don’t want to make friendship with Harijon students. As a result the guardians show indifference about their children’s education.

Ward Councilor Hazi Anichur Rahman Mukul said, under the leadership of the newly elected mayor, Jessore Municipality authority has already taken initiative for the development of Harijon, sex worker, indigenous, transgender and other marginalized groups living in the city. The authority will take all kinds of steps for them. He said, all have to be empathetic to develop the marginalized people and to solve their problems.

Renowned educationist and retired teacher Tarapado Das, the essay writer of the seminar and social worker, said, Harijon, indigenous and other marginalized people are direly facing discriminations. Their lands are encroached at different places. They are always deprived of their legal rights. They even don’t get dignity as a human being. Though all are equal as per the constitution, it is not practiced in reality. Anti-discrimination law is needed to ensure the constitutional rights of the neglected, deprived marginalized people. He hoped all concerned will go ahead to produce the law.

The special guest of the seminar Akramuddowla, president, Jessore Press Club, said anti-discrimination law is a must to ensure the rights of the marginalized people. Journalists are always empathetic to the marginalized people. We will always join the movements to attain their rights. The policy levels of the government and mainstream people including the civil society have to work sincerely to solve their problems and to enforce their movement to attain their rights.

Md. Maruful Islam, chief gust of the seminar and the newly elected mayor of Jessore Municipality, said in his speech, I know from my own experience the Harijons of Jessore live in various problems. The municipality authority has already thought of solving the problems. Their problems of housing, job permanency and others will be solved by turns. Problems of all the marginalized people who live in the town of Jessore will be solved.

The seminar ended with the speech of the president Razen Dom, president of BHOP, Jessore. He hoped that the mayor as the head of the municipality will solve the problems of the marginalized people including the Harijons. Anti-discrimination Act is nedded urgently.