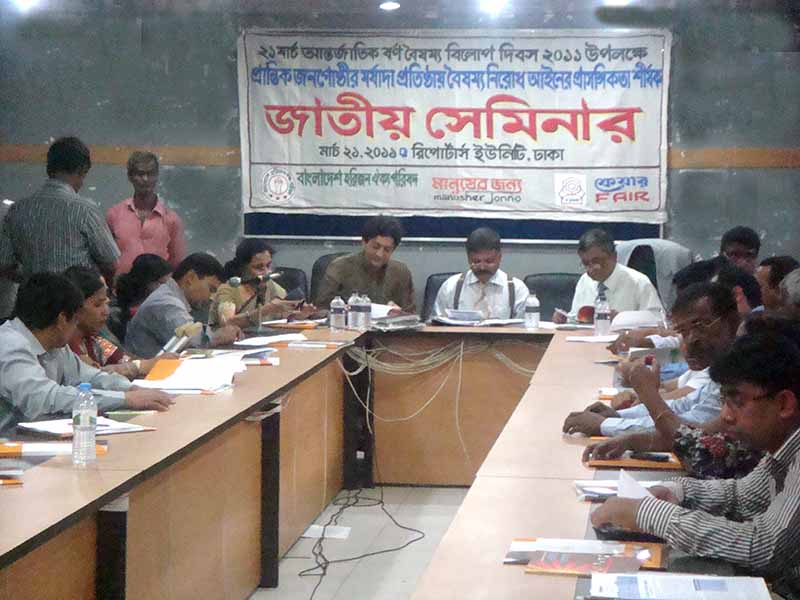 This type of discrimination violets the  articles 19, 27 and 28 of the constitution of Peoples’ Republic of Bangladesh. In order to ensure the constitutional rights of the marginalized people and to create pressure on the higher level of the government, with assistance of FAIR and Manusher Jonno Foundation, Bangladesh Harijon Oikko Parishad arranged a national seminar on Relevance of Anti-discrimination law to establish the dignity of marginalized people to observe International Elimination of Racial Discrimination Day on 21st March, 2011. The seminar was held at the conference room of Reporters Unity, Dhaka.

Dr. Abul Barakat said, economic, social freedom, transparency and security is never possible with exclusion of a portion of the society. He said, 82% of the disables are poor. He disclosed the loopholes of census and said the number of non-muslins is tactfully shown smaller than actual in the census. Though article 28 of the constitution says the equality of dignity of all citizens irrespective of nationality, religion, caste, creed and gender, the reality is quite different. Though there 45 groups of indigenous people in Bangladesh, the government has listed only 27 of them. Things are clear through the national budget. 2% is allocated for 2% of the population. The marginalized people were the first who responded to the war of liberation. So we have to understand the marginalized people and make development plan in association with them.

Special guest Zobaida Nasrin said, the government listed 27 small anthrop groups without any source. If the indigenous are recognized, the will get the right of land and that’s why some indigenous of the Chittagong Hill Tracts are not recognized. They are marginalized in all indicators. There Bangali labors are paid with BDT 100-120, whereas the indigenous are with BDT 60-70. Sex trade is recognized by the state. For the demands of the males in the male-dominated society, sex trade will exist. But the state and the society don’t want to recognize them. But these people are use to ensure of allocation of grants for HIV/AIDS. Dalit women are not allowed to take food in a restaurant. But their hands are turned (for sex). She said, on 25 March, 1971, the marginalized people of sweeper colony were the first who came forward.

On behalf of the disables, Feredousi Akhtar Rubi, ADD presented essay in the seminar. He wrote in her essay the family members of disables think of begging using them. The rich people hide their disable children. Disable women are being tortured. She said, the government excludes the disables from mainstream development programs. The government enacted Disable Welfare Act-2001 to show pity on the disables. The government signed the UNO Disable Rights Charter in 2006, but didn’t enact any law to enforce the charter. The disable has come under no other than safety net programs of the government. BDT 300/- monthly allowance for disables is really insufficient. Most of the organizations arrange events without thinking of the disables.

Nirmol Chandra Das, General Secretary, Bangladesh Harijon Oikko Parishad, presented essay on behalf of the Dalit people. He said, asked people to think about the services rendered by the Harijons. He further said, the Harijons are discriminated everywhere. There are many countries with a smaller population than the Dalit people of Bangladesh. But as there is no census, the Dalit people of Bangladesh are excluded from development programs. Although the constitution of Bangladesh promises to ensure equal rights to every citizen irrespective of religion, caste and creed, as because there is no anti-discrimination law, discrimination is practiced. Still humiliating customs of untouchables is practiced. We have no entry to restaurants and if we get entry they make us use marked plate, cup etc. Harijons face discrimination at schools also. The Dalit people are compelled to live in places different from others’ and with humiliating names such as Muchipara, Methorpotti etc. They have the right of contest in election, but nobody votes them. Dalit girls are victims of sex harassment. They have no room for sitting in the office they serve. They are not counted in the census by their own identity. As a result, they don’t come under safety net programs of the government. They are made bound to work with low wage. The educated young Harijons are persuaded tactfully to receive employment of sweeper position. Dalit people have no other choice but to live in unhealthy environment. No list of Harijon children of school admission age is prepared to admit them in schools. Nirmol Chandra Das upheld the demands of Dalits. He demanded to enact anti-discrimination law. He said, the Dalits should be counted with their identity in the census. 80% of cleaning job has to be reserved for the Harijons.

The guest and others expressed their support to the demand of enactment of anti-discrimination law in order to ensure the constitutional rights of all of the marginalized people including Harijon, Dalit, indigenous, transgender, sex worker and disable. They vowed to stand beside them. The made the following recommendations:

More three seminars on the same topic were held in Sirajgonj, Khulna and Jessore respectively on 27, 28 and 29 March, 2011. Mayor Mokaddes Ali, Mayor Talukdar Abdul Khalek and Mayor Md. Maruful Islam were the chief guests of the seminars of Sirajgonj, Khulna and Jessore respectively. They promised to solve the problems of Harijon people related with their salary, leave, residence education and others.