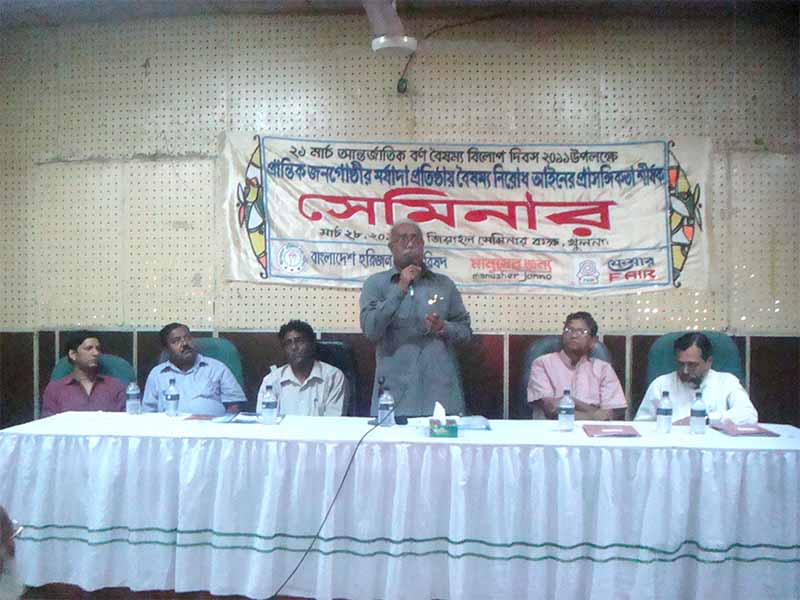 Relevance of Anti-discrimination Law: Anti-discrimination act is needed to establish the constitutional rights of the marginalized people. In order to create public opinion and create pressure on the policy level of the government, in association with FAIR and Manusher Jonno Foundation, Bangladesh Harijon Oikko Parishad arranged a national seminar on Relevance of Anti-discrimination Law to Establish Dignity of Marginalized People on 21 March, 2011 to observe International Elimination of Racial Discrimination Day. In the same form a seminar was held on the same topic in Zia Hall, Khulna on 28 March, 2011. The seminar was launched with the welcome speech of Dewan Akhtaruzzaman, Director of FAIR.  Dewan Akhtaruzzaman in his speech described in details how the marginalized people are being discriminated. He also presented the perspective and objective of the seminar. Renowned educationist Professor Anwarul Kadir, Director of Sundarbans Academy, presented the main essay in the seminar.

He wrote in the essay and said in his speech, there is no option to violet the rights that have been ensured by the constitution for every citizen of Bangladesh. The constitution of Bangladesh ensures basic rights of every citizen. The marginalized people also have the same rights equally. Their rights have to be ensured. He said, the Harijons of Khulna contributed to the achievement of independence in 1971 in association with the mainstream people. He asked all to come forward to ensure the rights of Harijons.

Sex worker Sharmin Akhtar, Durjoy Nari Sangha, said in her speech, sex workers are deprived of all kinds of social, state and religious rights. Their families are run by their income, but they don’t have the right to go their home. Family members and relatives don’t recognize them. Nobody in the city rent house to them. We leave a miserable life below humanity. Shuktara Islzm of Durjoy Nari Sangha spoke abput the miseries of sex workers. He said, the sex workers are ever victims of harassment of police and ransom. Nobody speaks of their rights. They don’t get any health service. Their children cannot get admitted into schools. Floating sex workers don’t have room for sleep. She demanded the enactment of Anti-discrimination Law in order to establish the rights of sex workers.

The Assistant Director of Khulna District Social Welfare delivered speech in the seminar as an especial guest. He made commitment he would ensure government facilities for the disables and other marginalized peoples. He said his office would carefully work for the legal demands of the marginalized people.

Special guest Executive Director of Rupantar, Swapan Guha sain said in his speech, anti-discrimination law is a must to ensure the rights of the marginalized people. But only law won’t be able to ensure their right back. In this perspective social awareness and positive attitude of civil society is needed. The marginalized people’s children’s education has to be ensured and honorable jobs and healthful residence.

The general secretary and president of BHOP Nirmol Chandra Das and Krishnala were present in the seminar as especial guests. Nirmol Das in his speech described the discriminations practiced agaist the Harijons. He said Harijons live in a very little room allocated by the Municipality with 4-5 or 8-10 family members. This life is not compatible with civilization. He said their job of cleaning service of Municipality or City Corporation is master roll or temporary basis with very low salary. He asked the chief guest of the seminar and the mayor of Kulna City Corporation Talukdar Abdul Khalek to solve problems of job permanency, low salary increase and residence of Harijons.

Krisna Lal in his speech said the Harijons have been deprived for ever. They are serving the society without getting anything in return. Even they don’t get the dignity as a human being. He asked the chief guest to solve the problems of Harijons of Khulna.

The chief guest Talukdar Abdul Khalek said, the Harijons of Khulna promptly took part in the war of liberation in 1971. There is no difference between them and us as human beings. All are equal to the eyes of the Creator. He said Harijons are compelled to do inhuman jobs. We have to pay their dignity which they deserve. He emphasized on the education of Harijon children. He made commitment to solve the problems of housing, job permanency and others of the Harijon employee of Khulna City Corporation.

Rajkumar, president of BHOP, Khulna presided over the seminar. He showed gratitude to the chief guest and others present in the seminar that came forward to solve the problems of the marginalized people. The seminar ended with his speech.

Relevance of Anti-discrimination Law at Khulna